Key slides from my final presentation focusing on the functional analysis and interpretations that can be made from a single gene: HER2: 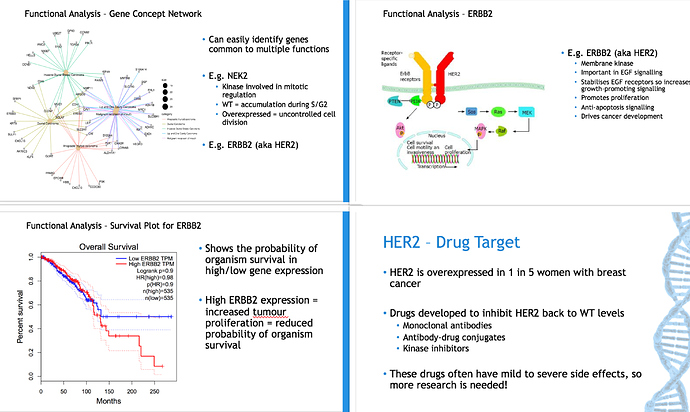 Further Notes: I really enjoyed learning how to create the metadata for a selected dataset, as this was not a step we had completed previously - learning how to do this means I am now able to complete every step of the pipeline independently, so I can carry forward these skills to analyse almost any dataset!

In that vein, I would love to develop my skills further so I can analyse any dataset I am interested in. This could include learning how to process data with different base packages, such as oligo, or being able to adapt the skills I have now developed to different pipeline designs. Another thing I noticed when selecting a dataset to analyse was that not all of the data was comparing normal vs cancer samples: some data compared gene expression before and after being treated with a candidate drug, for example. I would be interested to see how the pipeline or interpretations would be adapted to investigate a slightly different hypothesis, though the analysis is still based on gene expression.

Overall, I am really proud of how far I have come throughout the project, as I am now much more confident approaching coding and computational biology techniques, which I previously had very little experience with. I hope to apply these new skills to my undergraduate research project!